Then I Saw Red

I have to admit the past month laying in a comatose feeling has brought some good things out in me.  You do know, at one time, I was a huge sports fan. Okay, mainly NBA but still I knew the game inside out.  With that said, I decided to see what my dad loved so much about the Detroit Tigers.  I started watching the games and understood within a few minutes. Aghh..nothing is better than watch a “team”.  The chemistry, the respect and just the love of the game.  Obviously, the Tigers didn’t fair to well but in the meantime I had gotten to know the Red Sox a tad bit.  Ha.

This is kinda a funny post, huh? Denise, the new baseball fan? But seriously,  you have no idea how much time I spend just laying there. Laying there with a blank mind. It is crazy weird for me.  And I swear I am not a whimp but weekly chemo after 12 weeks straight catches up with you. But guess what, though the end of the road is getting a bit more exhausting, I’ve only got 4 treatments left! November 25 is the last day!  I can’t wait to feel “normal” again but in truth, I needed this “cancer”. It had changed me and it is a good thing.

So back to baseball. I decided after the Tigers lost I was gonna have to be a Red Sox fan for the World Series. I really like to know the players stories: where they grew up, do they have kids, and pretty much just “who” they are.  What an amazing group of guys. My gosh.

Let’s start with Jon Lester who stole my heart (pictured above).  I love this quote from a CNN interview,

“It might be hard to believe, but as difficult as cancer was, in some ways it was good for me.

Don’t get me wrong, I wouldn’t wish it on anyone. Even the word “cancer” brings back the nausea and pain, the fear I felt and the heartbreak I saw in my parents’ faces. The smells that fill hospitals and the constant tired feeling that comes with treatment are also permanently stuck in my memory.

But here’s the thing: The disease changed the path of my life in some ways that have been really great.”

Right? Great guy. And even better check out the foundation his wife, Farrah, and John set up for kids with cancer. Gosh, I just love good folks that give back.  Love it.  And the above pic is about 2yrs old, I believe he is on his 7th year cancer free.  You really need to google his story, it’s a good one. He puts a whole new light on why he wouldn’t trade having cancer. It changes your life.

Sorry this post is getting long, but I really wanted to share about David Ross. I just love this guy.  Ya, I don’t know him, but he seems so calm, cool and collect and at the same time so in “awe of the moment”.  I just read this little ditty about him,

“The signature moment, I think that’s what everybody lives for,” Ross said, his smile partly concealed by his Civil War general-type beard. “I’m just in awe of being in the World Series, really. That’s as signature as it gets.

“I’m on the podium, talking to you guys with the whole World Series (backdrop) behind me, right? That’s when you see people on TV. I’m stoked.”

Ha, seriously we as viewers and fans are so mesmerized by movie starts and pro-sports players we totally forget they are just like us.  I cracked up when I listened to the above interview. David Ross was totally plain old giddy to be on that podium just like a little boy would be. And that is awesome.

Okay, and my last guys has to be Dustin Pedroia. This guy, I just love him. So when I googled and read a zillion stories, the one I loved the most was the time he was recalling when his high school baseball coach kept comparing him to another (possibly better) player.

“You know what?” he says. “It ticked me off. He’s my coach, first of all. If you want [Patrick] on your team, go coach his high school. You’re either on my side or you’re out of here. You’re either two feet in or two feet out.

“I remember it,” Pedroia goes on. “I remember everything. I remember thinking to myself, ‘There’s no way that guy’s better than me.’ But that’s what pushes me. At that time, was that guy better than me? Yeah, probably. But I wasn’t going to let myself think that.” 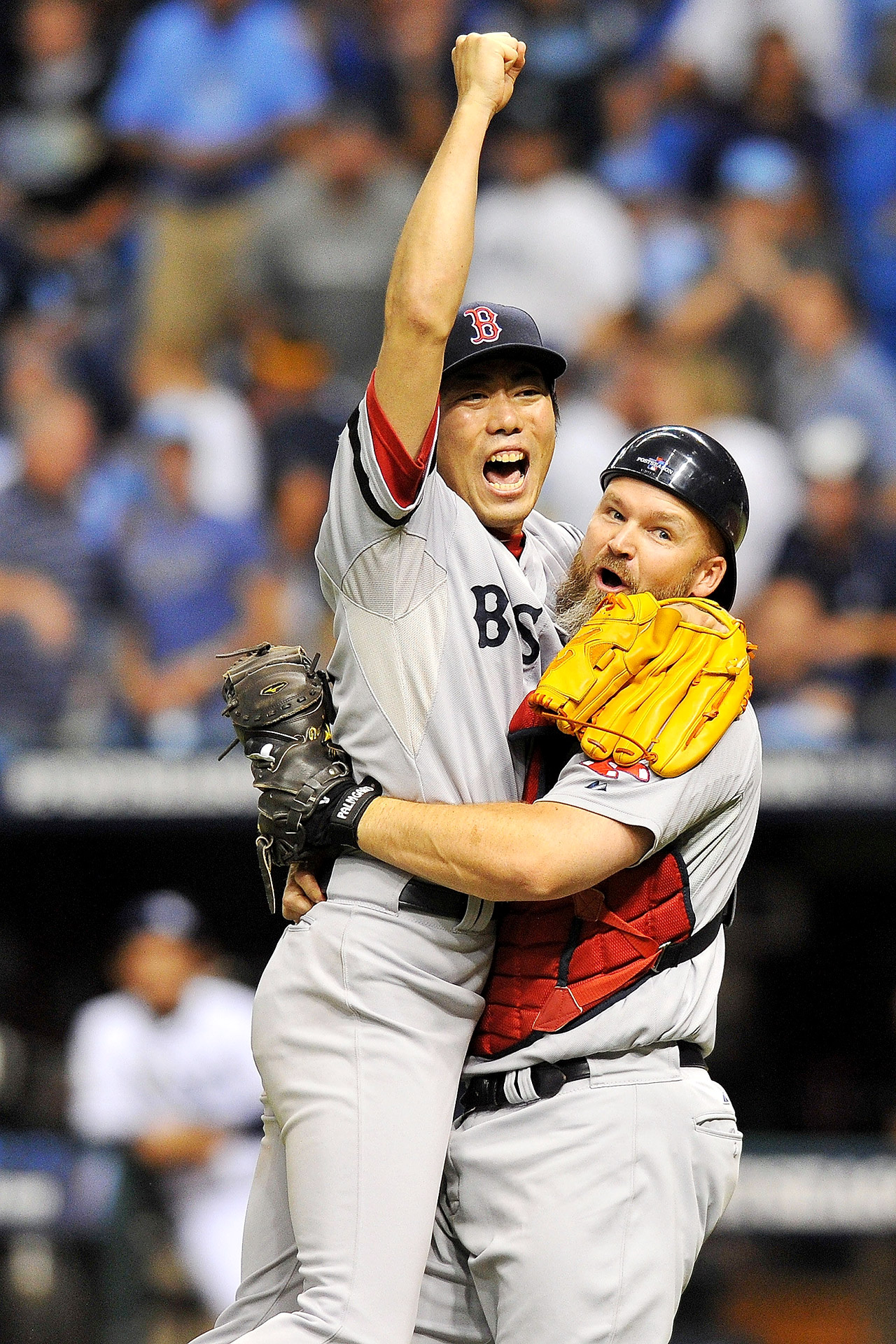 Yup, long post. But I gotta end with one more, Koji Uehara, the relief pitcher from Japan. I don;t think he speaks much English but he is great to watch. Talk about a little giddy by jumping up and down with excitement. He has this innocence to him, or at least I view it that way. Then when I read the below translated blog entry, I just fell in love a bit more.

“I’m always trying to pitch my best, but why do people keep bringing up the past?’’ he wrote. “An acquaintance told me that some stupid magazine has been writing stuff about me. I’m not saying for them to root for me, but it would be nice if they don’t write negative things about people doing their best.’’

Alrighty, back to the Dr to get my daily injection. Then it’s time for the World Series. But after that, get ready to nominate your most deserving Teachers and Nurses for our Thanksgiving Spread the Love! And be sure to check out these boys tonite!

Denise OMGoodness…Great post and so honored that you spoke of Jonny!! WE ARE THE WORLD SERIES CHAMPIONS 2013!! WAHOO. You are in our daily thoughts and prayers!! Thank goodness your treatments are just about over!! Prayers for you and your family, may God wrap his arms around you all! XOXO Polly Johnson

Your truly an inspiration. I can’t express how much I loved ready this post. Tears and smiles.. sometimes is funny how things can just “hit home”. 🙂 Sending love and prayers!!

Great post!!! It is always nice to see the “good” that comes out of cancer! BTW, if you get a chance, read Dustin Pedroia’s book….you will love him even more! God Bless you!

So good to hear from you, Denise. We’re praying for you daily! I love baseball too! I love going to games but I feel like I can concentrate on it better watching on TV.

OK. I have been down and feeling sorry for myself. Thanks for this Denise. I lost my dog and her puppies this week and of all the days on my birthday. Sadly, she was also my birthday gift 3 years ago. I have cried about her for days. I needed to do a reality check and KNOW it can get worse. Thank you, I think of you daily, I worry as if you are my relative. I guess that’s what following you around for years and goggling all about Denise did for me. I did it all. From McDonalds to coke- God Bless and your almost done. Praise GOD.
Hugs….

Red Sox and Denise fan! World Series, world friend and everything in between!

I was just talking about you to a client. Telling them how I literally was shaking with nerves almost a year ago. Then I saw you. You gave me a huge hug & forever changed me. I was immediately okay. I always thought you were special, cancer or not. Now I wonder if the drugs are getting to you…GO CARDINALS!!!

Woo Hoo!!! That light at the end of the tunnel is in sight. I enjoyed reading these stories that you shared about the baseball players. I do want to read more especially about Jon Lester and his family. Great to hear from you!

Oh how I Love this blog!! Huge Red Sox fan here! And from Missouri 🙂 Koji is my FAVE! I love how giddy he gets! I think he is precious 🙂 Prayers for you as always!!!

I have never read one of your post but I will be a reader for now on. I can not imagine your fight. I had so many medical issues a few years back while pregnant and I had a bunch of blood clots. That was my first time walking into a building packed full of patients fighting to receive the all clear. No one thought I would survive after the emergency c section (cardiac arrest). I was so down and just every step left me gasping for air. Then fast forward 6 months. I am still in so much pain and I still have an infection and now I am losing all my hair. For the first time the hematologist is not coming to me in a hospital room but I am well enough to go to him. I slowly walk into the building packed full of people who started their journey healthy and are fighting to get back there. Different paths but all fighting for the same outcome. Fighting to feel normal. Fighting to not feel a stranger to this body that is left after all the treatments and hospitalization. My journey is at a plateau and I am thankful for the normal days. Thinking positive goes a long way to feeling positive. My thoughts are with you today. One more treatment down after today and your normal is getting closer. I hope today is a good day for you.

Thank you Denise for being the strong woman you are. You have quite a future ahead of you!

Teachers and Nurses + Thanksgiving + Spread the Love = Perfection!!! And it’s a great post. You must donate your brain (and maybe your heart) to science!!! And Nov 25 – wow! Big Thanksgiving at your house!!

Great blog today Denise…only one problem, Go Cardinals!! 🙂 Lots of love to you!